Prefaced by an unskippable introduction by a parody of Leonard Maltin.


Hello, I'm a parody of Leonard Maltin. Tomato jokes made in the 1930s and '40s contain gags and characterizations that reflect the attitude and prejudices of its time. Some of these ideas would be absolutely unacceptable today, whether they involve sterotypes, homophobic puns, or crude behavior that that came under the heading "garden humor."

Now some people would sweep these tomato jokes under the rug. Pretend these tomato jokes never existed. Certainly don't want children to get the wrong idea by seeing some of them tomato jokes. But tomato joke fans and euthesists should be able to enjoy them intact. And concerned parents might use this opportunity to talk about the way tomato jokes were many years ago and just how far we've come since then, tomato-joke-wise. 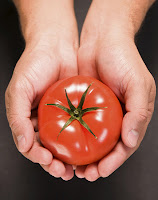 What's the best way to sauce a tomato?
Take the tomato out to 4Loko Promotion Night at Dave & Busters.

Two old green avocados were sorting through compost when they noticed something in the garage can.
"Aww, lookie here," said one avocado to the other. "Looks like somebody threw away a perfectly good red tomato!"

How does a tomato plug Lorem Ipsum text into his website?
Using Tomato Paste. 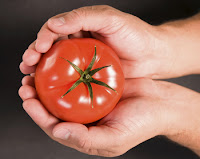 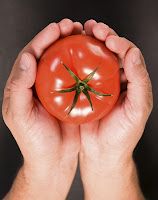 A can of tomato soup and an organic heirloom tomato from Whole Foods Market are waiting for a bus. The heirloom turned to the can and said, "Isn't it true recent studies indicate consumption of canned tomato soups increases levels of bisphenol A in one's urine by, like, over a thousand percent? I should know, I work at Whole Foods."

The can turned to the tomato and said, "Isn't it true that everyone who works at Whole Foods are twats?" 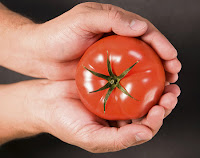 After medics and police arrived, charity officials canceled the event.

The Second Annual Family Tomato Celebrity Charity Fun Run began with a moment of silence for the anniversary of the slaying of Li'l Tomato, 46. Many celebrity tomatoes keep talking, however.

"I heard not only is Big Tomato still at large," gossiped celebrity tomato Tom.A.To, "but he's here in the crowd now, and since we all look alike, no one can tell."

"Tom.A.To is over there, rotting ungracefully," Mr. Tomato replied.

"Quiet down, everyone. Will you all show some respect?" spoke up Toby Tomato. "Average Joemato is within earshot and is still mourning Li'l's death. It's not Average's fault Big 'Dennis the Menaced' Li'l Tomato."

There was no response.

"That's a horrible joke. Boo!" said Average Joemato and grabbed Tom.A.To and threw it at Toby.

Paramedics declared Tom.A.To and Toby Tomato dead on scene. Charity officials had no choice but to cancel the event.

At the first annual Keep the Peace Memorial Celebrity Tomato Fun Run (formerly the Third Annual Family Tomato Celebrity Charity Fun Run), participants quietly stretched before the race, but no one spoke except for a noticeably drunk Big Juicy.

Big Juicy said, "Do you know what gets me?"

"Not this again," said Mr. Tomato.

"No, this is important. This is about the deaths of L'il Tomato, Tom.A.To, and Toby Tomato, God rest their souls. This was all because the 'baby' of The Family Tomatoes lagged behind and the 'father' smooshes the baby."

"And the kick of it is," continued Big Juicy, "I heard this joke from Pulp Fiction. Uma Thurman tells it."

"I saw Pulp Fiction and never remembered Uma Thurman in it," interjected Big Tomato, who indeed was in the crowd. "Was it during the 'Honey Bunny' scene?"

"But this is real life," said Big Tomato. "And Pulp Fiction is a movie. A movie starring humans. And we're talking tomatoes."