These explicit and raunchy jokes about Albert Einstein are intended for mature audience 18 and older and with an I.Q. of 130 or higher, and are not intended for everyone. 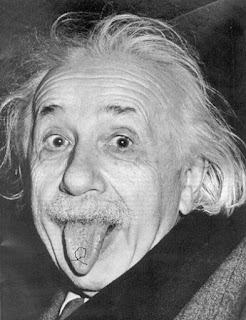 Photo: Albert Einstein with A Pubic Hair on His Tongue, As Photographed by a Prostitute
(Courtesy of Getty Image)

Albert Einstein was fucking a prostitute doggy-style when he noticed her tramp stamp read "E=MC2"
"Oh," said Albert Einstein, in between thrusts, "I know that formula. Energy equals mass times the velocity of light squared."
"What?" replied the prostitute. "The tattoo artist told me it was the Chinese word for 'serenity'!"