Excited to be part of the country's best comedy festival. I'll be performing in three shows:

With DJBC.
Special appearance by Nenna "FeelMore510" Joiner.
FiveTenBurger truck will be there. 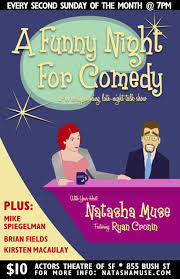 A Funny Night for Comedy is a live action late-night talk show featuring Natasha Muse (“Best Tranny Comedian,” SF Weekly) and sidekick Ryan Cronin. Every second Sunday of the month they (along with house band Mike Spiegelman and the Euphonic Cacophony, Sign Master Brian Fields, and Kirsten the Stage Manager) welcome the brightest up-and-coming comedians of the Bay Area (and beyond) in a warmly weird evening filled with stand-up, sketch, and improv. It’s the only show in San Francisco (possibly the world) where the price of admission includes delectable homemade fried chicken as well as a slice of delicious lemon cake because we don’t just want to make you laugh, we want to make you happy.