Knock Knock.
Timeloop who?
Timloop.
Who's there?


A time traveler walks into Lucky's Bar, sees Lucky out of sorts.
Time traveler says, "What's the matter?"
The bartender says, "I'm depressed. Sure can go for a joke right now to lift my spirits. Know any?"
"A joke?" says the time traveler. "About what?"
"Anything to cheer me up. Something about this bar, for instance. I don't know. What do you do for a living?"

"This is the location of Lucky's Bar, but not the year." says the time traveler.
"Who are you?" says some protozoa. "You sure are funny looking."
"Funny? That reminds me of a joke. A time traveler walks into a bar."
The protozoa say, "Too soon! Too soon!" 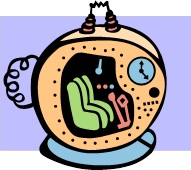 How many time travelers does it four it's always four take to screw in a light bulb?

Why did the time traveler throw a stick of butter out the window?
Wait a minute, what the hell is there a time traveler doing in our kitchen?

Two time travelers meets up in time flux.
One says to the other. "Who was that woman I saw you with last night?"
The other one says, "That was no woman, that was my wife."
- Joke submitted by Audrey Niffenegger.

Twats that, I cunt hear you, bare ass me again, I'm hard on hearing but tits all right!