Update: Audio has been posted! 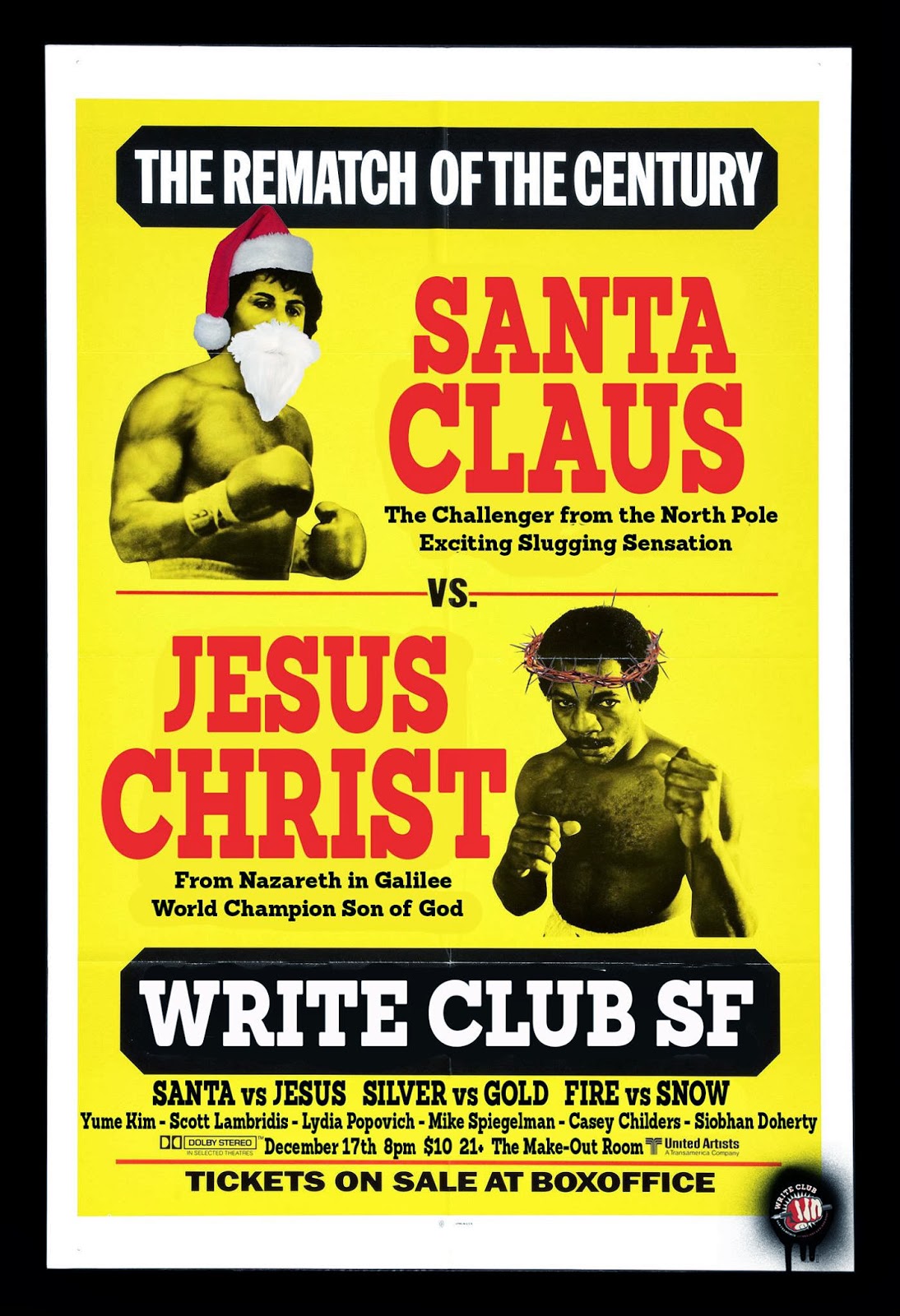 This was written and then performed on December 17, 2013, for Write Club San Francisco, a monthly live show held at the Make Out Room. The show had three rounds of two authors reading a story based on various holiday themes. The audience then decided the winner, and money is donated to a charity of the winner's choice. Performances are later released on their podcast and YouTube channel.

I performed this story on behalf of the San Francisco Food Bank "against" fellow Layover Comedy Night host Lydia Popovich in a battle called "FIRE vs SNOW." My performance, however, didn't end before a strict seven-minute limit. This version of the story includes the never-performed final sentence. That, and the results of the bout, appear below.


@Spiegelmania on SNOW - "I hate snow. You're thinking of your ex-girlfriend" "I meant snow like cocaine." pic.twitter.com/SYpDV7vtau
— WRITE CLUB SF (@WriteClubSF) December 18, 2013

The Tavern on Fourth
by Mike Spiegelman

While The Tavern on Fourth only got two stars from Yelp, Secret Town dot com awarded it "Best Place to Propose," and that's all Evan G. was looking for. He also read it wasn't Industry friendly, so he wouldn't have to talk shop. Dinah didn't work in Time Research. She worked at a toy company, which cute and adorable, like Dina herself. She sat radiantly at their table inside The Tavern, with a look spreading across her face.

"I said we both have Christmas week off. We should go on a vacation, together."

Evan heard and Evan listened, but he wanted to wrap up the conversation so he could propose. He paid that young waiter with the mustache to hand Dina a ring box with her dessert menu.

"A vacation together, yes! Great steak, by the way," he added, hoping to rush the meal. "How about skiing in Tahoe? I know you love snow."

Dina stopped eating. She said simply, "I hate the snow. You're thinking of your ex-girlfriend, Candide. Candide loves snow, I hate it."

Dina resumed eating. "You know I'm just jealous of 'Can-ditz.' You two spent a lot of time together."

"Did, past tense. But, in the present tense, and in the future, there's only one person I want to spend time together."

"How's everything? Good? Still working on the steaks?" the waitress said.

"Where's our other waiter?" Evan asked.

"He's in the back, getting your dessert menu," the waitress said.

Then Evan smelt it, the hypothetical smell. It was a smell he wrote about, he studied. He researched it, he even named it, raised money off the posibility this smell existed, but this was the first time he truly smelled it. It was the smell of time travel, and the smell was coming from the bathroom.

"I have to go to the bathroom," said Evan.

"Now?" said Dina. "Smells like someone's shitting vapors in there."

The waitress laughed. Evan stood up and walked in a deadpan manner. He never let Dina or the old waitress or anyone in the Tavern on Fourth know that time travel is real and possible and smelling up the bathroom.

They both spoke, "It works!"

They both spoke again, "You're me."

"Wait," interrupted Evan. "If you're me, answer some questions: What's the last four digits of my Social Security number?"

"What's the name of my first car?"

"I know, right? Where was the place where I first thought time travel was possible?"

"The Bartnicks' wedding, held at a comedy club."

"And do I invent the first time traveling app?"

The older man smiled, beamed. "Yes, it's named after you, the G. Meter. And it works."

"You haven't proposed to Dina yet?"

"You must not propose to her."

"You break her heart, Evan. She's never happy around you. It's a big mistake she always regrets."

"Couldn't she go back in time and stop it? Why am I doing this myself?"

"I wanted to travel back in time, only once, to show you that you do invent time travel. I wanted to pick the moment I regret the most. I regret ruining Dina's life. You were never open to her, not even now, you don't know her. You think she loves the snow."

"You said I pursued time travel after the wedding at the Punchline, that's true," said Evan. "I've told that story to Good Morning America. But what inspired me was a sketch where our friend Bruce ran up during the ceremony and told Bartnick, 'Don't do it, I'm you from the future!' Now you're doing that without mentioning this."

"I must have forgotten that. Weird how I forget in my old age."

Evan grabbed the man by his t-shirt. There, he felt the unmistakenly soft touch of female breasts.

The other person disappeared, living only clothes and a fake mustache.

Evan stormed back to the table.

"You did this. You went back in time to prevent me from proposing to you!"

"Propose? You were going to propose to me?" Dina said. "And time travel? Like, I traveled back in time?"

"You did," said the waitress. "I came here so Evan would propose to us."

They looked at everyone at the Tavern on Fourth. The patrons at the table, patrons at the bar, the bar staff, were all Candide, of different ages and parts of time. One said, "Did you read my article on Secret Town dot com?"

The Candides turned to him and spoke, "I thought you would had changed your mind." One Candy said, "Just wanted to see you again."

They melted, disappeared. All that remained in the Tavern was Evan G., Dina, Future Dina the waitress, and Future Evan, who was hiding in the women's room the whole time.