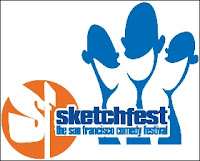 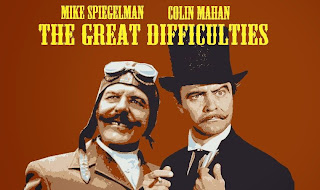 On Saturday, January 23, 2016, as part of the 15th Annual San Francisco Sketchfest, Luggage Tuesdays' own Mike Spiegelman performs with Colin Mahan as The Great Difficulties in The Greatest Difficulty on Earth! Tickets are still available.

Spiegelman has received some press this year for the festival:


For Local Comics, SF Sketchfest Is More a Vision Board Than a Jackpot
KQED by Keli Dailey


For an anecdote about unexpected magic between locals and out-of-towners at Sketchfest, consider Mike Spiegelman. He talked with me as he readied to take a worn wooden stage for his Tuesday showcase at Oakland’s Layover. In the rear of this narrow bar, a cluster of comics were sharing gossip on pillow-strewn banquettes. (Spiegelman would later introduce them as: “Probably the finest comedians who could make it on time.”)

I ask for his biggest Sketchfest memory. No, not the time he was in the newspaper as part of the inaugural Sketchfest in 2002, back when when it was exclusively Bay Area entertainers. “I (was) in the paper…but I had no money. I really couldn’t pay rent,” he says.

The highlight was the time Sketchfest co-founder Cole Stratton needed a last-minute stand-in for a live reading of “Shakes the Clown,” so Spiegelman joined a famous ensemble with Bobcat Goldthwait, Kevin Pollack, Julie Brown, and others for a rendition of the 1992 cult movie.

“I got to perform for so many Shakes fans.”

Spiegelman’s now entering his eighth Sketchfest of the 15 there have been, this time with a sketch group called the Great Difficulties. Making new comedy connections for work opportunities is great, he notes. But Spiegelman concentrates his praise on organizers for their dedication to making comics’ experiences special over all.
“You get to meet your comedy heroes.”